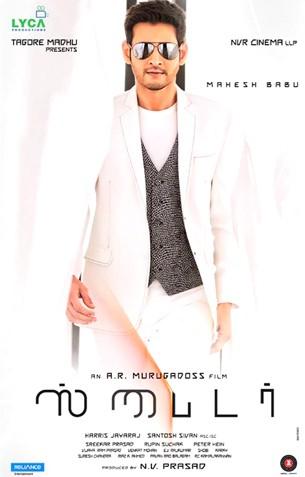 Amidst great expectations, Mahesh Babu makes his grand Tamil debut and his choice of director AR Murugadoss has done a near flawless job of executing what was expected of him. Produced by NVR Cinemas LLP, the movie follows a familiar ARM pattern with intelligent plot twists and a villain that the audience could bank upon.

For Tamil audience who have repeatedly seen Vijay play Mahesh Babu’s remakes in Kollywood, it feels like they are seeing Vijay on screen because of the mannerisms, dialog delivery and body language. But, for the Tollywood Prince it’s clearly a fantastic debut in an edge-of-the-seat thriller that has multiple moments when the hero and villain outshine each other continuously.

Mahesh Babu is Shiva who works in the intelligence bureau and taps phone calls to avert a crime before it happens. His career leads him both to a psychotic villain and the heroine, all at once. While his romance takes backstage, SJ Suryah’s entry in his life and the brutal murders he commit begins an intense cat and mouse chase.

Making a bilingual movie is a tough call which AR Murugadoss handled to near perfection. There’s enough moments to applaud for Tamil movie lovers while some of them may look over-the-top which are tailor made for Telugu fans.

Mahesh Babu looks fantabulous! The charming actor has worked hard to get the right pronunciation in Tamil which adds authenticity to the movie. Rakul Preet Singh is a typical heroine who’s beautiful, funny in places and grooves in the songs. Bharath has a short yet memorable cameo. In comes SJ Suryah and the entire game changes. His voice, slim demeanor and that sadistic look ensures he’s a villain everyone would love. And, the Joker reference is inevitable yet the character stands on its own.

Without SJ Suryah’s presence, Spyder could have faltered but it doesn’t as he keeps throwing one cool move after the other. Camerawork by Santosh Siva provides the sophisticated touch the narrative needs while some of the VFX scenes are prolonged than what is expected. Director AR Murugadoss and his team did enough research so as to make the intelligence wing sound plausible without being gimmicky.

Music by Harris Jayaraj manages to pass the grades with foot tapping numbers. The background score may not be as good as Thuppaki yet it keeps the scenes looking racy and sounds good. Betting high on the intelligence of Mahesh Babu and SJ Suryah, Spyder easily wins the race and offers a thrilling ride for the viewers.

·         Harris Jayaraj has composed some foot tapping numbers and shines in the background score too.

·         Technically strong and there’s a social message too

Verdict – With enough clap worthy moments, Spyder is an engaging cat-mouse chase between an intelligent hero and a psychotic villain.

Spyder is a Tamil movie. are part of the cast of Spyder. The movie is directed by Music is by . Production .