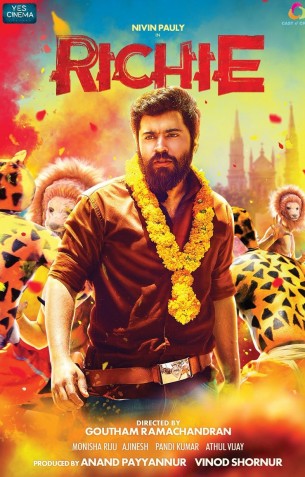 Richie is the big Tamil debut for Nivin Pauly but surprisingly the movie is more about hero worship because it is strewn with characters all over and each one of them have their own story to share.

A strong point about the movie directed by Gautham Ramachandran is that the movie follows a non-linear narration where the story begins after a fateful night that changes everybody’s life at once. However, unlike conventional movies, the climax is not showcased in the beginning which ensures audience are left clueless and wait for the big reveal in the end when they connect the dots.

Richie is a local gangster who works for the landlord in the coastal areas of Thoothukudi and his job is to ensure the area is under his owner’s control. However, he was not born this way because his father is a priest in the church but circumstances lead to him being jailed in the juvenile prison in a young age. Meanwhile, there is Natarajan who hails from Madurai and is close friends with Kumaravel because he loves his sister Lakshmi Priya.

How multiple characters meet in various aspects of their life and see others in a different perspective is what the movie is all about. The film is populated with lots of metaphors and short stories narrated by the character himself to justify what he is up to, especially his mood to take revenge on his long-lost friend who betrayed him.

Nivin Pauly makes a stubborn debut in Tamil making him a promising actor for all top Tamil directors. He’s got the style, suave and the potential to play a solid gangster or any other role for that matter. Cast is the strongest point of Richie as a movie with Natarajan and Kumaravel pulling off dialogs with ease, while Murugadoss of Aadukalam captivates with his ease of acting.

Shraddha Srinath is more of a tool to the story rather than a heroine and her mature acting lends credibility to the role of a reporter who’s covering the story. Cinematography is just mind-blowingly good with exceptionally well-done shots of the vast ocean and the real locations in the region. Pandi Kumar’s camera work and Ajaneesh’s background music keeps the build up scenes on a high note always.

Richie has its fair share of downsides as the film’s excellent casting has been somewhat letdown due to lack of hard hitting character development with the required number of scenes yet the movie’s unconventional narration, a cult classic like presentation and the odd setting is sure to impress most viewers.

Verdict – Richie is stylish, a visual treat with new-age narrative

Verdict :Richie is stylish, a visual treat with new-age narrative

Richie is a Tamil movie. are part of the cast of Richie. The movie is directed by Music is by . Production .