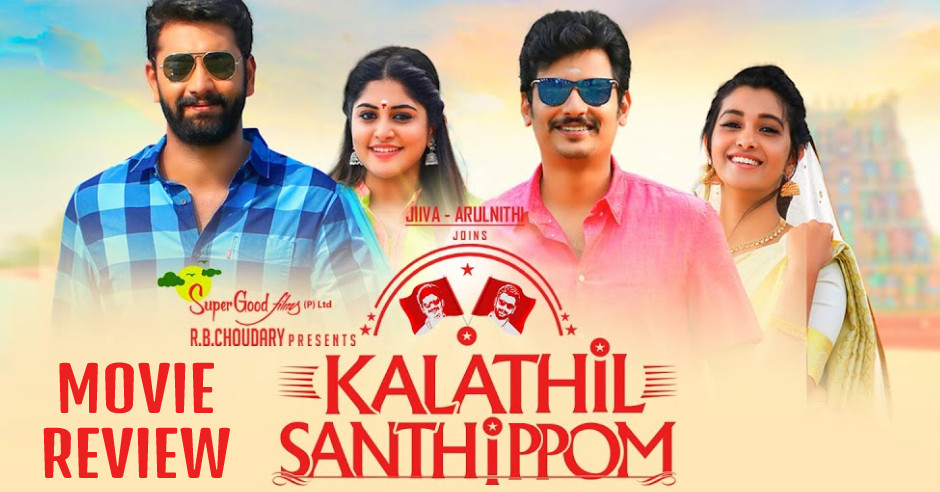 The theatrical business is slowly getting back on track, thanks to the massive success of Thalapathy Vijay's Master and having said that, here we have Kalathil Sandhippom, the Jiiva - Arulnithi starrer which has released in theatres today. The film is directed by N Rajasekhar and has Priya Bhavani Shankar and Manjima Mohan playing the female leads. Here is our take on this film!

Kalathil Sandhippom is a film that takes us through the lives of two best friends, Anand and Ashok. The film deals with the conflicts that the friends face in marrying their loved ones and the twists and turns that take place.

Talking about the positives, Arulnithi is earnest and delivers an impressive performance. Similarly, Jiiva also strikes a good balance and makes the equation work well. It is indeed good to see Jiiva taking a backseat and allowing Arulnithi to score in the action scenes. Jiiva looks charming and maintains the positivity of the film neatly. The duo’s performances make Kalathil Sandhippom a decent watch despite the other negatives. The performances of all the actors including Manjima Mohan, Priya Bhavani Shankar, Radha Ravi, Bala Saravanan, Robo Shankar, Ilavarasu, Vela Ramamoorthy, look good and they deliver what is expected. Special credits to Bala Saravanan and Robo Shankar who score well with their one-liners.

Interestingly, there are a few scenes that are well-staged and those scenes have the potential to impress the audience. The kabaddi sequence in the second half would be enjoyed by the fans as it helps with the ‘mass’ factor.

On the flip side, the film lacks freshness in several departments. The writing is good enough to appeal to the family audiences, but the treatment is templated and you are able to predict the next happening. There is no major conflict at all, in the film and hence you don’t feel the emotions strongly. Most of the conflicts get over with an action sequence and there is nothing more you could see.

The makers could have played even more with the friendship angle since that is a relationship that could connect instantly with the masses. Director Rajasekar delivers a mainstream commercial family entertainer in a tried and tested formula. Maybe, with some sort of freshness in the packaging and more interesting scenes could have made Kalathil Sandhippom an even more entertaining film.

Neither the songs nor the background score have the brand of Yuvan Shankar Raja and it comes as a disappointment. Abinandhan Ramanujam’s visuals look bright and give a vibrant flavour to the film.

Super Good Films is an esteemed production house in Tamil cinema known for bankrolling quality family entertainers and the people who come into the theatres with the belief in the production house would not be disappointed.

Putting everything together, one can say that Kalathil Sandhippom is a templated family-friendship based film that could be watched for the impressive star cast and performances.

Verdict :Kalathil Sandhippom is a passable friendship drama that could have been treated and packaged better!

Kalathil Santhippom is a Tamil movie. Arulnidhi,Jiiva,Manjima Mohan,Priya Bhavani Shankar are part of the cast of Kalathil Santhippom. The movie is directed by Rajasekhar Music is by Yuvan Shankar Raja . Production Super Good Films.