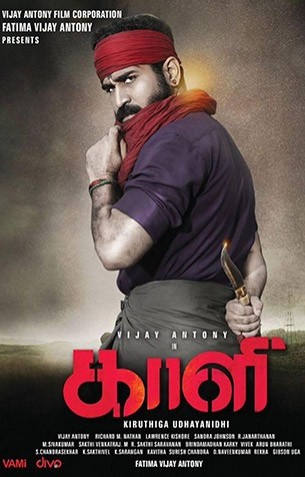 The story starts off showing Vijay Antony as Bharath, the MD of the Bharath Multi-Speciality Hospital in the US, who is frequently haunted by nightmares that feature a snake and a bull clashing against each other.

Once Bharath starts to ponder what could be the reason for such a weird dream to occur regularly, he comes upon the stark realization that his parents aren’t really his parents. He then goes on a quest and comes to India to find his biological parents whenhe comes across three different stories in which Vijay Antony is seen as three different characters. As a result, he plays four different characters, but Bharath is the only true character, whereas the remaining are just imaginary.

Anjali is Bharath’s pair while Sunainaa, Shilpa Manjunath and Amritha Aiyer all play the fictional characters’ romantic interests appearing in cameo roles and have little to do to bring an effect to the story.

From a technical standpoint, Kaali is excellent; be it Richard M. Nathan’s cinematography and Lawrence Kishore’s editing, both their efforts go hand-in-hand and the results are visible on the screen when we view the final output. As for the music, the background score is commendable, while the "Arumbey" track is the only memorable tune of the lot of songs in the film.

The screenplay is quite different as the flashback narrative takes a non-linear route and we are given extensive time to witness Vijay Antony’s histrionic skills.

The entire film primarily revolves on Vijay Antony’s emotions and he has utilized the opportunity quite well to the fullest extent. Each flashback story is connected to the next flashback story which leads to the completion of the plot at the climax where we witness the hero finally find his real parents.

Although predictable at times, a fresh approach to the story

Story could have had more depth

Kaali is a Tamil movie. Nasser,Yogi Babu,Sunaina,Anjali are part of the cast of Kaali. The movie is directed by Kiruthiga Udhayanidhi Music is by Vijay Antony . Production Vijay Antony Film Corporation.