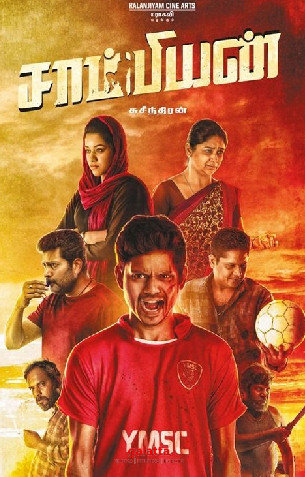 Suseenthiran, with a streak to not remember since 2013, comes up with his second film of the year after Kennedy Club. This again is a sports drama where he has taken up a story based on the life of young and aspiring football players who comes from North Chennai; people who aren’t lucky as a few others, people who find it hard to make ends meet everyday yet have a desire to make it big. Champion is the film that we are going to talk about today. Read further to know if it’s worthwhile to watch.

Suseenthiran’s previous 2 sports dramas talked about the politics involved in those games whereas Champion largely talks about the struggle that a North Chennai guy goes through because of locality they live in. Champion is more like a sports film linked with a gangster angle because 30 percent of the film is about an unorganised criminal group based out of North Chennai. The overall storyline is pretty similar to Vijay’s Bigil but the treatment and focus here is admirable. The screenplay hardly deviates from his core subject.

Though Champion is not anything new or fresh to Suseenthiran done before, it still is an attempt to watch and enjoy. It did have an engaging screenplay with some fun football moments. Debut actor Vishwa who plays the lead has done an incredible job. He doesn’t look like a debutant and Vishwa was just so perfect for the role. You can see a world class football in him. He is definitely an actor to watch.

Narain who recently had a worthy part to play in Kaithi finds another interesting role in Champion. It’s a well etched out character which was also enacted beautifully. Other characters that make impact are Vasavi who plays the hero’s mother. She will hold your attention during the emotional scenes. Stunt Silva who plays the baddie gets a solid role and has done full justice to it. Arrol Corelli’s background score gels well with the movie even though the songs hardly make an impact. DoP Sujith Sarang delivers compelling visuals especially in the scenes involving the actual game and also during the fight sequences.

Overall, we don’t see Suseenthiran in full form but nevertheless it is his best work in the recent years.

Verdict :A generic mixture of sports and gangster action, yet neatly packed with a believable screenplay!

Champion is a Tamil movie. Narain,Vishwa,Mirnalini Ravi,Suseenthiran are part of the cast of Champion. The movie is directed by Suseenthiran Music is by . Production Kalanjiam Cine Arts.