Arya was last seen in the critically acclaimed Magamuni directed by Santhakumar and produced by K.E.Gnanavel Raja's Studio Green banner. The young actor's performance was raved by the audience and the critics and it gave the much needed break for him. He is currently shooting for his next film, Teddy, directed by Shakti Soundar Rajan of Miruthan and Tik Tik Tik fame. We have now got some exclusive updates on this interesting project bankrolled by Gnanavel Raja.

The current ongoing schedule kickstarted on October 9th and will last over a span of 40 days until the third week of November. Actors Arya, Sathish and Bigg Boss fame Sakshi Agarwal will take place in this schedule. Arya's wife and actress Sayyeshaa will play the female lead in this film. In addition, we are told that the makers are planning for an early 2020 theatrical release.

An interesting aspect about Teddy is that there will be a Teddy Bear in the film that will have vital importance to the core premise. An official confirmation on these new details are awaited. 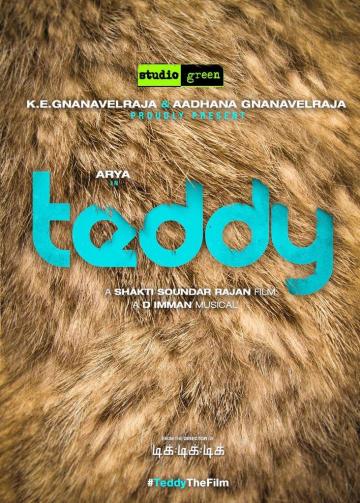