Krishand's Aavasavyuham, now on SonyLiv, is an eco-drama that’s a brilliant subversion of both form and content. 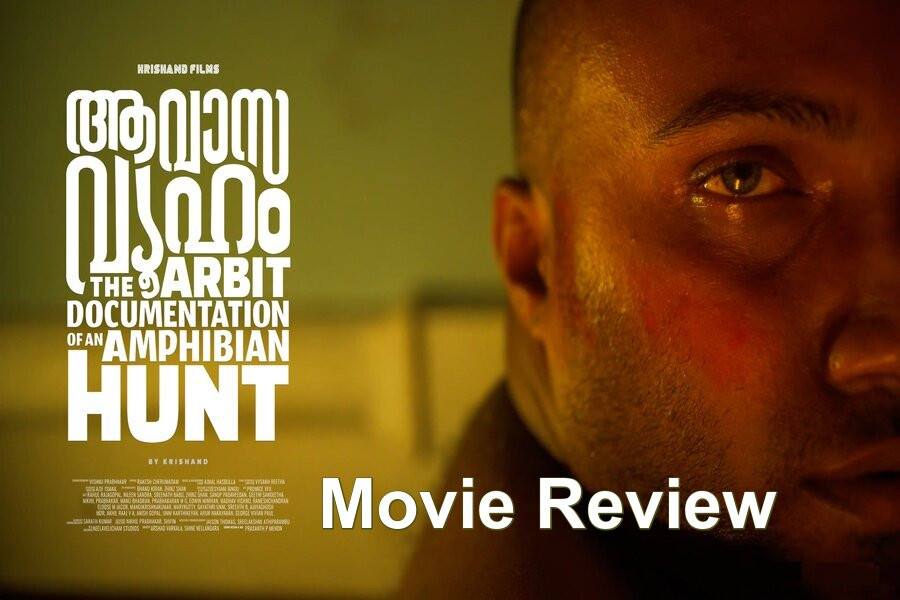 Cast : Ajayaghish, Sreejith Babu, Sreenath Babu,
Production : Krishand RK
Director : Krishand RK
Music Director : Ajmal Hasbulla
The film plays like a revenge story mixed with a mockumentary, and. The eco-issues spoken about are all too real. But the treatment is surreal.

The best thing about Krishand's new film, Aavasavyuham, is its English title: "The Arbit Documentation Of An Amphibian Hunt". It describes so well what's about to follow, the hunt for an amphibian that is told in a deliberately arbitrary way. The basic template is one that we know from popular cinema: this is a revenge story. One man kills another. The latter's family sets out to kill this killer. But the template of the narrative is what we know from non-mainstream cinema: this is a kind of mockumetary, filled with narrations of people who knew the killer, and this lends the film a loose sort of Rashomon effect. The eco-issues spoken about are all too real. But the treatment is surreal. The result is a brilliant subversion of both form and content.

The narrators include shrimp farmers and environmental activists and a biologist who is searching for a particular kind of frog. He says our earth is losing 500 species per day. And what about the people who inhabit this film's setting, a small island-village near Kochi named Puthuvypeen. The government has granted the Indian Oil Corporation permission to build an LPG storage terminal here, and apart from the inherent dangers of explosions and suchlike, the project has affected those whose livelihood depends on the sea. "There is no future in fishing," someone says. Other facts keep coming fast – like how farm-depleting snails came here by attaching themselves to ships from another country, or how sand brought in from faraway places for landfills happened to include snake eggs, which hatched and introduced these reptiles to a habitat that did not have them. In short, it’s like an invasion, every bit as harmful as the IOC project.

And slowly we get to the film's fabulous metaphor, a man named Joy (and played by Rahul Rajagopal). But is he a man? He smells of fish. He has the ability to communicate with fish and draw them into nets. He is one with Nature, unlike the others around him. He bites like a beast when cornered. He washes up on a shore, like one of those snails that came on a ship from a foreign land. And he undergoes a metamorphosis that comes to represent the fragile ecosystem that is in danger – which will undergo its own metamorphosis after the IOC project. And just like that biologist spoke of hunting for a rare species of frog, people begin to hunt for the rare species that Joy has become.

The film is exquisitely shot by Vishnu Prabhakar, with deeply saturated "nature" colours coexisting with the lifelike images of a documentary. Ajmal Hasbulla's music is largely percussive, as though suggesting a hunt. Some of the lines are both tragic and laugh-out-loud funny: a sample being, "Does planting mangrove make a Maoist?” Aavasavyuham premiered at the 26th International Film Festival of Kerala, and went on to win the FIPRESCI and NETPAC Awards for Best Malayalam Film. At a time there is so much discussion about which films "deserve" awards, the most recent to weigh in being Adoor Gopalakrishnan, there is much satisfaction about this odd little work being celebrated. It is the rare message movie that is conscious about what it says and also how it says it. This is genuine art.