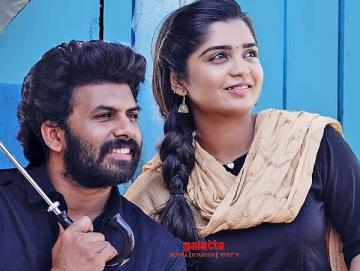 Gouri G Kishan became popular after her impressive role in the hit Tamil film 96 which also landed her an important role in Vijay upcoming film Thalapathy64. Gouri G Kishan's other upcoming project is in Malayalam and the film titled Anugraheethan Antony starring alongside Sunny Wayne. The movie also features Sidhique, Indrans, Jaffer Idukki, Manikandan Achari, Suraj Venjaramoodu, Baiju and Muthumani in important roles as well. Anugraheethan Antony is directed by Prince Joy, written by Naveen T Manilal and the story is penned by Jishnu S Ramesh and Aswin Prakash. Music for the film is scored by Arun Muraleedharan and the lyrics written by Manu Manjith. The film is produced by M Shijith under the banner of Lekhsya Entertainments.

With the big release ahead, the team has now released the full video of the song Kamini from the movie. The song features the lead actors Sunny Wayne and Gouri G Kishan. The song composed by Arun Muraleedharan has vocals by Harisankar KS with the lines penned by Manu Manjith.