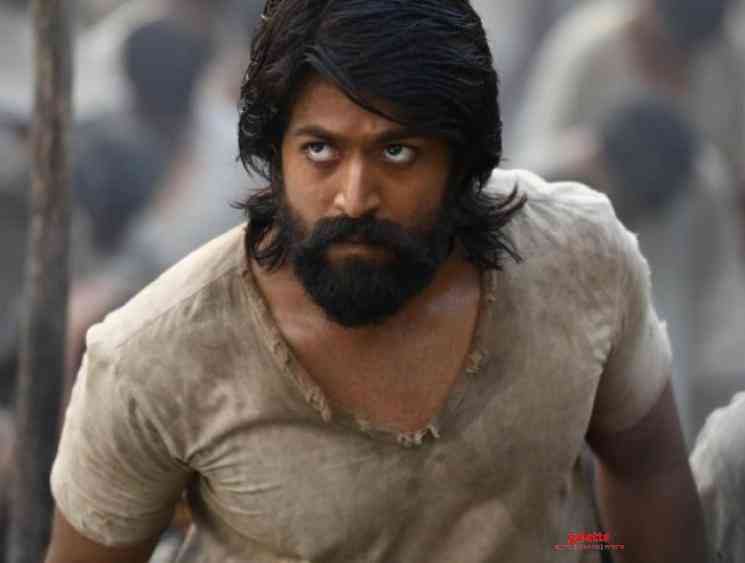 One of the biggest films of 2020, the upcoming period action Kannada film, K. G. F: Chapter 2, announced to hit theatres as a summer release is the sequel to the 2018 nationwide blockbuster, K. G. F: Chapter 1. Dubbed in Tamil, Telugu, Malayalam and Hindi, fans were introduced to Kannada actor, Yash, who went on to become an instant rage among youngsters. Post the astounding box office and critical success of KGF: Chapter 1, fans have been keeping a close watch on all developments regarding the sequel and were treated to a massive treat on December 21 when the KGF: Chapter 2 first look was released. Today (08.01.2020) being Yash's birthday, the new KGF 2 second look poster showing Yash in his mass avatar has been unveiled. Check it out below:

Likewise, Yash's wife, Radhika Pandit, a Kannada actress herself, had taken over the actor's Twitter account along with their daughter, Arya, to convey their birthday wishes by making a cake for the superstar, who is at present shooting for KGF: Chapter 2. Watch the video below:

There was considerable disappointment after it was announced that the KGF: Chapter 2 teaser would not be coming out owing to the team still shooting the film. However, the KGF2 second look poster no doubt compensates for the teaser that is yet to be released, which we can expect to be a massive event in the days ahead. K. G. F: Chapter 2 is being directed by Prashant Neel and once again under Vijay Kiragandur’s Hombale Films banner with Yash reprising his role as Raja Krishnappa Bairya "Rocky" alongside heroine Srinidhi Shetty as the character Reena.

There is a huge excitement surrounding KGF 2 as it introduces the dreaded character, Adheera, being portrayed by Bollywood superstar Sanjay Dutt, who incidentally is making his acting debut in Kannada cinema. Composer Ravi Basrur, who played a huge role in KGF: Chapter 1 with his songs and thunderous background score, is expected to once again deliver the goods for the sequel, which as well is being dubbed in Tamil, Hindi, Telugu and Malayalam languages.