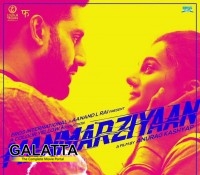 Rumi (Taapsee Pannu) and Vicky (Vicky Kaushal) are madly in love with each other. Due to complicated situations driven by contrast characters, Rumi gets married to Robbie, played by Abhishek Bachchan. What happens after marriage forms the crux of the story.

Abhishek Bachchan’s role is sketched in a calm and matured manner, it was easy to connect with his character. Taapsee takes the center stage as the film revolves around her character and her acting is also good. Vicky Kaushal’s role was a little strange and was hard to judge, but he impressed as usual with his acting. A sidekick in Junior Bachchan’s house brought in some chill-out moments through his some comedies to this serious film. There are many other characters present, but they all were given just a small space to score.

The direction of Anurag Kashyap is appealing, his narration here is fresh and it is different from his previous films. The approach is not raw as his type of movies, he has understood that his pattern of filmmaking is not required for this storyline and taken the movie accordingly. Kanika Dhillon’s script is pretty much familiar, but the characters are written in a smart way. Apart from strong situations, the sensible dialogues have also helped to construct the beautiful conversations present in this movie. One might feel the screenplay to be extremely slow, but it has given a vast space for the characters to evolve.

Music of Amit Trivedi is absolutely soulful, the songs effortlessly convey the mood. His background music is refreshing and provides a soothing feel. The cinematography of Sylvester Fonseca is apt for the genre and he has used a choice of color pallet. Editing of Aarti Bajaj was helpful to transform the impact during the breakpoint, but she could have chopped few lengthy scenes that act as the speed-breakers in the progression.

A 'Random Twin' concept used to fill the gap was a different idea. Even though the nature of the few characters are confused, the presentation is cut and clear. The film is purely for certain section of an elite audience as there are many complicated situations and characters riding throughout the movie. The interval scene was executed very well and so as the climax sequence. The flow is sluggish and it requires a lot of patience for a person to relish this off-beat kind movie.

Verdict: Anurag Kashyap and team take us on a complicated yet worthy trip.