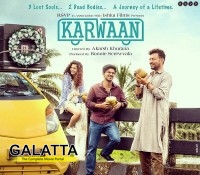 Verdict: Lead artists shine in this subtle drama that is dragged extensively with plenty of irrelevant sub-plots