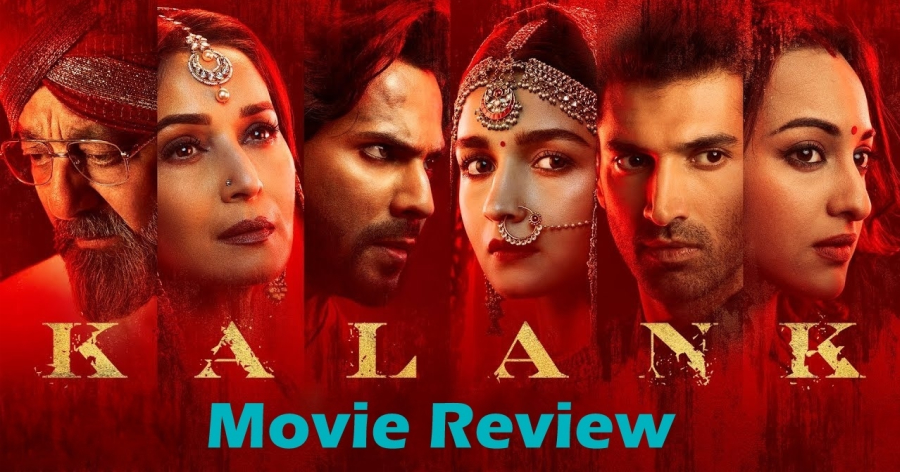 Kalank is a period drama set in 1940s, the pre-independence period. The story has 6 major characters played by Varun Dhawan, Alia Bhatt, Aditya Roy Kapur, Sonakshi Sinha, Sanjay Dutt, and Madhuri Dixit. The relationship links and conflicts between them form the crux of the story.

The first thing that impresses in the movie are its visuals, the quality is rich and the art department work is done with certain situational ideas that elevate camera work. However, the VFX work is a big letdown, even the basic fire shots look artificial and the bullfight scene doesn't give a good impression as the sequence is rapidly shown with a dull stunt choreography.

Pritam’s music is a major strength to the film, the songs were sweet to listento and they have also been converted beautifully on screen. There are too many songs and obviously, their placement was disturbing. The Kriti Sanon item number is needless to the flow and there are some extended tracks which drain out the attention. One must mention that ‘Ghar More Pardesiya’ was the best moment of the entire movie, the sync between Alia Bhatt and Madhuri Dixit was amusing during this song.

The casting is impressive on the whole. The characterisations of Varun Dhawan, Aditya Roy Kapur, and Alia Bhatt drive the conflicts of the film. Sanjay Dutt and Madhuri Dixit get into the limelight with a solid interval-block twist. Sonakshi Sinha’s role is weak and Kiara Advani also has nothing much to do in the storyline. The scope for performing is a little low, but their presence is overall convincing.

Parallel narration has been done in a couple of places and it helps to move forward the story faster. The first half is pretty engaging as the character establishments are decently done, so we don’t really care about the run-time. The mystery between the characters and their relationships is maintained well till the halfway mark. With a solid twist in the interval stage, the main conflict opens up and the curiosity eventually increases for the rest of the movie.

But the main issue is with the latter half as the flow gets extremely predictable after the hidden conflicts are revealed. The scenes and situations are flat and very cliched with the same old-school drama. Also, the movie travels at a sluggish pace throughout the second half. With weak writing and execution, we don't really care for the emotional drama game happening on screen.

The past lives of the characters are conveyed only through dialogues and so it doesn’t get strongly registered. The theme is along the lines of the Tamil film Madarasapattinam and the narrative also gives the same feel. Life decisions that a few characters take in a crucial situation could have had better justifications and they could have been told more convincingly.

The base is strong but the writers could have brought much more out of it. Certain concepts like Hindu-Muslim riots and complicated relationships are conveniently written just to bring a connect but the film fails to create an impact as they have not been presented in the right way by the filmmaker. The boring proceedings and lack of excitement especially in the second half make it just a mediocre outing.

Verdict: Kalank is visually rich with an interesting conflict but it fails as a weak-on-content period drama with convenient writing and low engagement value.

Watch Kalank Trailer - a glimpse at the tale about love, affair, violence and revenge!

CHECK TEASER: Did you know Sridevi was replaced by Madhuri Dixit in this epic film after her death?