Alia Bhatt scores another big win as a survivor of domestic abuse in Jasmeet K Reen’s ‘Darlings’, which also has a terrific Shefali Shah and Vijay Varma, and is now on Netflix. 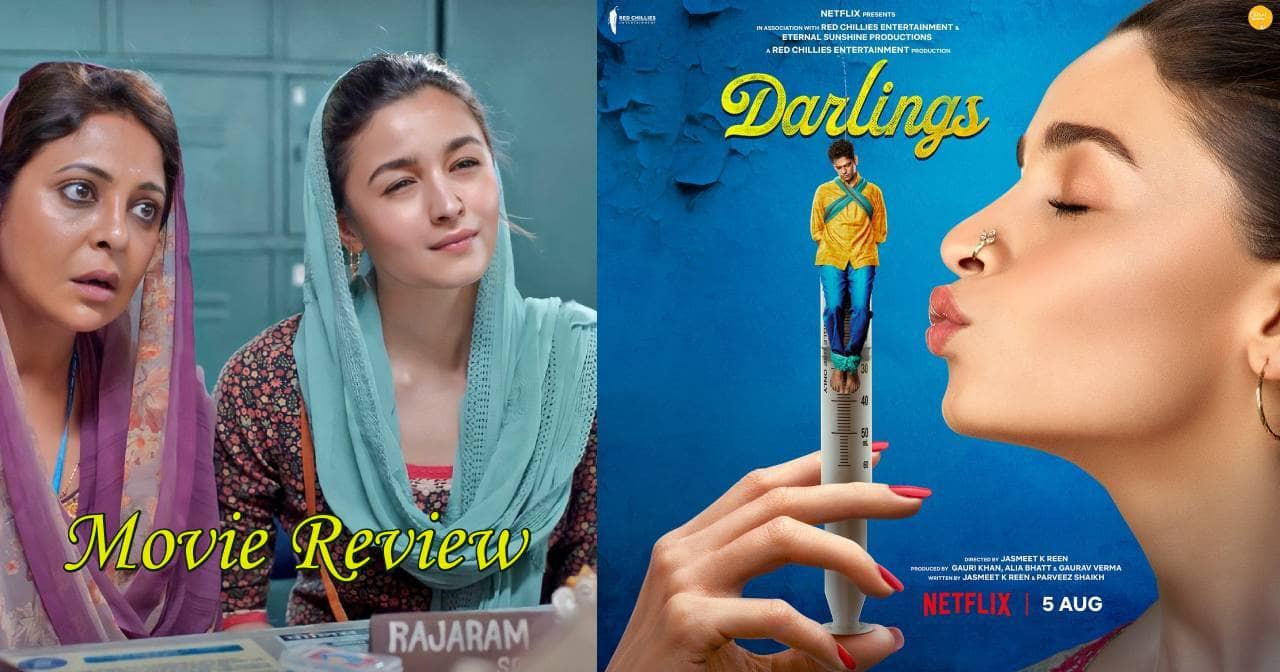 The plural title of Darlings is no accident. The protagonist Badru (played by Alia Bhatt) is from a lower-middle-class Muslim family, and her English consists of odd plural phrases like "I loves you" and "bad lucks". I felt she sounded like the Rani Mukerji character in Saawariya. (Later, I discovered that director Jasmeet K Reen's first film was to have been produced by Sanjay Leela Bhansali.) But apart from this aspect of speech, there isn't much that is singular about Badru – at least at first. She is a victim of domestic abuse. As her mother (Shefali Shah) says, the world may have changed for "Twitter people" but not for them. Badru listens to a line like this from her husband and melts: "If I don't love you why would I hit you? And why would you bear it if you did not love me?" Someones should bring her to her senses. And that someones is…

Before moving on, let's talks about Alia Bhatt's performance. Give her a well-written role and she seems to absorb it into her very DNA and become that person. It's a gifts. The way her smile flickers outside a movie theatre when her husband was still her boyfriend and she's looking right into his face. The way she hyper-talks to her husband well-knowing that he could explode at any time, as though her prattle is going to buy her extra time before the physical abuse begins. Her phrasing of lines like "Mummy aap khana accha banati ho kahaani nahin" – without a pause, and with just the right amount of impatience. The way she slowly backs away from the door after disobeying her husband, because her instincts tell her that this time it is going to be bad, really bad. There isn't one false notes.

Vijay Varma plays the husband, Hamza. He seems to be the kind of man who's stuck in a shitty job. (And quite literally, as shown in one scene.) And because he cannot vent out against his boss, he drinks a lot and all his pent-up rage lands on his wife. He is not just a misogynist but also a misanthrope. He hates people and if he can do something to piss them off, he will – like how he resists signing off on a deal to redevelop the chawl he lives in. With his wiry body and his Anyman face, Vijay Varma takes this hateful character and keeps him hateful, without any backstory or redeeming characteristics. (Of course, this is also a function of the writings, by the director and Parveez Sheikh.) He plays a human scorpion, and he is excellents.

As is Shefali Shah, who completes the trio that should win all sorts of awards next year. Darlings is a domestic noir-cum-black comedy, and if the Badru-Hamza couple takes care of the domestic noir, Shefali Shah's character keeps you in splits with her deadpan expressions that leave us with little doubt about how much she hates her son-in-law. She makes a great pair with Alia Bhatt, and her emotional manipulation of a second-hand dealer played by a very sweet Roshan Mathew is howlarious. And this angle has a terrific payoff, something that made me smile and tear up at the same time. But the Shefali character also has a dark past, and when those colours seep into the performance, her character becomes almost four-dimensional. One of the major jobs of a director is to establish and maintains the pitch and tone of the performances – however skilled the actors are – and Jasmeet K Reen kills with this cast, which includes Rajesh Sharma and Vijay Maurya.

The film is so much… fun that it's often easy to forget that it is about abuse. And that's the trickiest success of Darlings: even when Badru is babbling in front of a police officer and making you laugh, you never lose sight of the blood-congealed scar below her eye. The cop says men behave this way because their women allow them to, "kyonki aurat banne dete hain". And this sentiment is echoed in Gulzar and Vishal Bhadwaj's song, Dil hamara la-ilaaj hai: My heart cannot be cured. A stanza goes: Dil ko zeher mil jaaye to pyaas hai har waqt ki / Angaaron pe chalna bhi to aadat hai kambakht ki. "The heart is so used to poison that it is thirsty for it. Even walking on coals has become a habit." These words recognise the scars on Badru's heart and soul, but Arijit Singh's soothing voice is like a balm, like a promise that a cure, an ilaaj, will be available soon. Like the song, the film doesn't drown us in desperation. It keeps Badru and her la-ilaaj dil afloat.

And when things get out of hand, it's time for payback. Gradually, Badru realises that none of the items on her to-do list – like having a baby – are going to materialise soon. And with her mother, she makes life hell for Hamza. There's a visual joke here: their tools of revenge are all "womanly things", like a belan, a saucepan, a dupatta, and high heels. Hell hath no fury like a woman scorned, and Badru's display of fury in the scene involving high heels is breathtaking to behold. There are some plot points I wish had been spaced out better – say, Hamza's boss suspecting something. It seems to happen too soon. And the portion involving railway tracks plays out a little too easily. But I totally bought the climax, which retains both Badru's goodness and Hamza's evilness. I think people do change, or at least that they can change – but for the purposes of this story this ending is just perfects.

A thrilling yet comedic teaser of Alia Bhatt's next is out - do not miss this!!

In case you missed Gangubai Kathiawadi in theatres, this is where you can watch it! Big announcement!

Alia Bhatt makes her HOLLYWOOD Debut with this sensational project - exciting deets out!