Anubhav Sinha’s ‘Anek’, with Ayushmann Khurrana, takes us into the problems in the North East, but the socio-dramatic punch of this duo’s earlier work is missing. 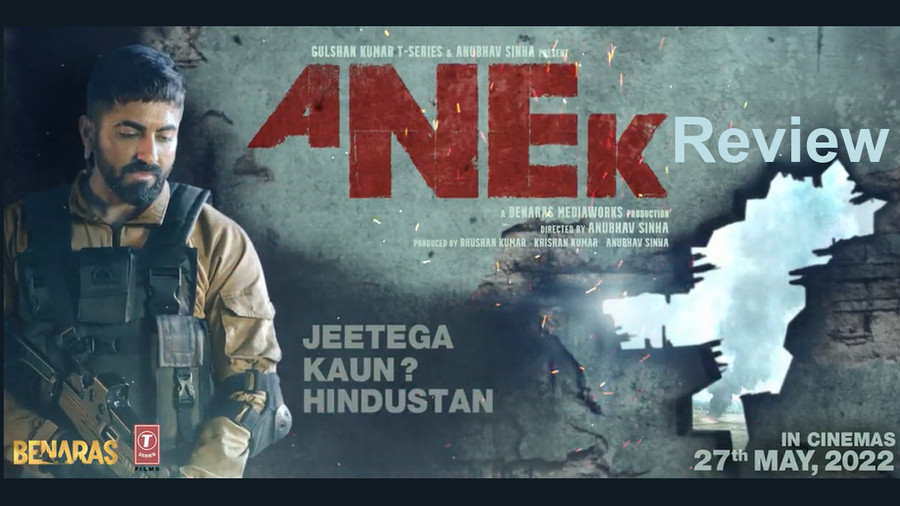 Anubhav Sinha may be one of the most important, and also one of the most earnest Hindi filmmakers today. Ever since he made that U-turn with Mulk, he has been a man on a mission. There's a Bhagat Singh line used in Article 15, that it takes a loud voice to make the deaf hear. That's his guiding philosophy, which is why his films function at two levels: at the surface level, there's the story, and beneath that basic narrative, there is the scaffolding of a ton of research. And yet, these are not simple-minded "message movies". In Article 15, the dominant-caste protagonist is no simple-minded saviour. He doesn't parachute down and rescue the Dalit girl. He has to first earn the right to save that girl, which means he has to educate himself first about life in rural India, understand what he is dealing with, and finally descend into a metaphorical swamp that symbolises all the muck that has permeated our society. Only then can he save the girl. There is this great line his wife delivers: "Hero nahin chahiye. Bas aise log chahiye jo hero ka wait na kare." We don't need a hero. We need people who don't wait for heroes.

Accordingly, Ayushmann Khurrana is not the "hero" of Anubhav's new film, Anek. The film is set in the North East, which forms the "NE" in the title design of "ANEK".  He is not even the protagonist. Nor is he the saviour. Like in Article 15, he is a somewhat cocky man who comes to a new place and realises he is out of his depth, and he becomes our guide through the unrest in the region. His name is significant. Anubhav likes naming his characters along the lines of their function in the plot. In Article 15, you may recall the Dalit activist. His name was Nishad, which is the name of a caste ranked lower down in the varna system. (Ekalavya, for instance, was a Nishada.) In Anek, we get a jingoistic soldier who speaks as though every line of his was written by Sunny Deol from Gadar. His name, aptly, is Veer. And Ayushmann is named Aman, which means peace. He works on secret missions for India, apparently to bring about… peace.

But how do you define peace? This is the point Anubhav wants us to dwell on in Anek, whose crux is the signing of a peace accord with a man who heads the most powerful separatist group in the region. (We learn there are many such groups.) There is a line that goes: One man's peace is another man's chaos. So if Delhi, the power centre, wants peace in the North East, it is by unleashing armed forces and unimaginable horrors on those regions. Through men like Aman, Delhi captures the militants and can claim to have obtained peace, but the civilians are left in chaos. At another point, peace is defined as something that is confused with control. Think about that for a minute! Finally, we get this thought: Is it possible that nobody really wants this peace, that unrest is the natural state of affairs?

The big problem in Anek is that a lot of this comes in the form of in-your-face dialogue, which makes us feel like we are listening to a political manifesto. "Delhi is like a landlord." "Violence is not a solution." "People know nothing about our struggle." "Indians do not accept diversity." "Soldiers look at our children like terrorists, and many of these children are 10th-class dropouts." There are discussions about elections every five years that change nothing, or how to define an Indian. Aman's voice-overs are better: there's at least a bit of poetry in them, a sense of self-examination and a diary-like making sense of what is happening. But the other lines, though true, are far too simplistic – as are some of the character arcs. When a boy sings a beautiful song, we know something bad is going to happen. He is either going to die, or the song on his lips will soon be replaced with a gun in his hands. We know this because it is an inevitability we have witnessed in countless films about war.

The powerful visual images and conceptual touches work much better. Anek makes us wonder what Mary Kom must have felt after winning her medals and holding up the Indian flag. Pride, certainly – but perhaps there was also the confusion of representing a country that doesn't really treat you as one of its citizens. This character, a boxer, is played by Andrea Kevichüsa. It is an awkward performance, but the character serves a purpose: her boxing matches are contrasted with actual fighting in her region. Two forms of combat – that's a nice conceptual touch, and Ewan Mulligan's cinematography brings out both the beauty of bloodletting as well as the tragedy. Even better is the small romance that she has with a mainland Indian. It is used metaphorically, that someone from her region cannot trust anyone from the rest of her country.

But these conceits are few and far between, and Anek, for the most part, becomes a series of mini-sermons, an op-ed piece in the form of a film. Anubhav tries to shape this information into conversations, but we are always aware that we are being spoon-fed a bitter pill. Research is important, but it is more important that the audience is unaware of how much research has gone into a film. That is when the fourth wall drops and we truly enter the world of the movie. If Anubhav Sinha wants to continue on this path, this is something he might want to think about. A two-and-a-half hour film cannot cover everything. Anek does have its strengths. It does not take sides. Both mainland India and the North East are shown to have their own issues and sly agendas. And the film has some solid performances, especially the one by Manoj Pahwa as a man from Delhi whose cheerful exterior hides all shades of sinister motives. But the gut-punch of a Mulk is missing.

After the film, I wondered why. There, too, we had explicit dialogues like who is a jihadi. There, too, we had a Hindu woman with the very Hindu name of Aarti. There, too, we had lines like this one: "It is not a religious community that killed Gandhi but one man." But in that film, and in Thappad, and in Article 15, we were following one narrative about one person or one family. So by concentrating and by containing a large issue among a small group of people we got to know as individuals, we had an automatic emotional hook. A "region" is more abstract than a "person", and perhaps the reason Anek stays aloof is because everyone is given equal space, and it's not just one narrative about one person or one family. If you think along those lines, Anek is certainly a more inclusive movie than those earlier ones, even if that, again, is more of an interesting concept than a compelling work of drama.

Renigunta to be remade in Kannada