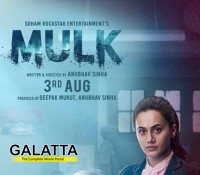 Mulk is a Hindi movie. are part of the cast of Mulk. The movie is directed by Anubhav Sinha Music is by Anurag Saikia,Prasad Sashte . Production Banaras MediaWorks,Soham Rockstar Entertainment.