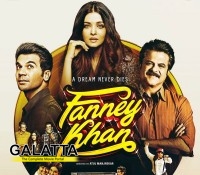 Anil Kapoor passionate on stage singing but he is a taxi driver by profession, but his daughter is keen on becoming a singer. Aishwarya Rai is a popular stage singer in town, Anil Kapoor cracks a way to make his daughter famous.

Aishwarya Rai looks so young and she gorgeous in every frame she appears, and performs well as always. Anil Kapoor’s ideology and his characterization is good, also his performance is also great.

Rajkummar Rao is super impressive with his funny expressions, his romance portions towards the end with Aishwarya Rai were a delight to watch.

Script is quite simple, yet the inputs are attractive. But the way things have been treated are extremely artificial, in fact few moments are practically impossible. Dialogues are decent and they convey the mood and basic nature of a character correctly.

Direction falls flat as the bland approach does not fit to the nature of the script. Amit Trivedi’s songs are a treat to listen and experienced cinematographer Tirru have captured the visuals beautifully too. But the music is not really a part of the narration here, they fail to convey a situation at the respective place. Tanishk Bagchi’s background music is in a solid sync with the flow. Editing is convincing, still the run time could have been reduced by five to ten minutes.

Supporting characters have a dull sketch, also studio owner role that appears is just sick to see. Scenes that have all three lead artists together are engaging and also fun to watch.

The kidnap sequence is also fine, though there is lack of logic in it. Climax is unwantedly melodramatic, but the end bit is pleasant.

Verdict :A middling musical drama that is watchable for the performances of lead cast.

Fanney Khan is a Hindi movie. are part of the cast of Fanney Khan. The movie is directed by Atul Manjrekar Music is by Amit Trivedi,Tanishk Bagchi . Production Anil Kapoor Films & Communication Network,Rakeysh Omprakash Mehra Pictures.