All you need to know about what  led to JNU attack 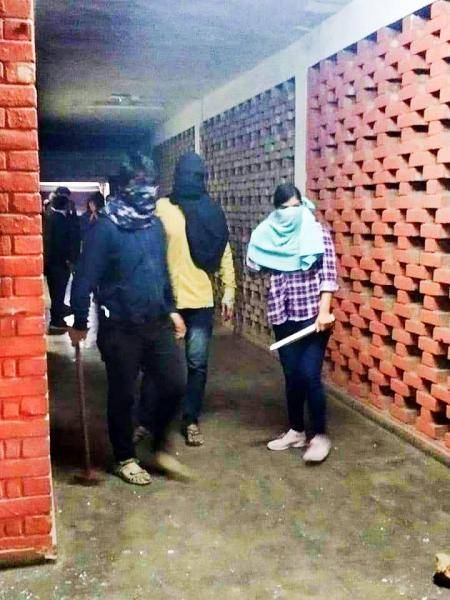 Delhi: On the night of January 5, a mob of ABVP cadres barged into the Jawaharlal Nehru University (JNU) in the national capital of Delhi, attacking the students in the hostels and drawing international attention to a months-long strike in one of the most prestigious public universities in India. This attack has come twenty-three days after police violence in Jamia Millia Islamia University, Aligarh Muslim University, and Cotton College against students who were peacefully protesting the Citizenship Amendment Act passed by the government of India. Here's a precis of the events over the past couple of months, which has been cited as the main reason for the violence on the campus.

Here's my account of what happened at the JNU main gate last night. Violence happened not only inside but also outside the main gate, where about a hundred goons were beating people up at will. The attack seems organised, and planned in collaboration with the police. (1/n)

Students of JNU have been on strike over the past few months against a steep fee hike, which will make the university inaccessible to the economically and socially marginalised sections. The state has been accused of trying to suppress the strike using underhand techniques and threats.

The issue escalated on January 4 after the security staff, who were allegedly ordered to break up the strike, barged in and began a violent campaign across the university. This later worsened when ABVP students of the university indulged in isolated incidents of violence against their protesting classmates.

Our team of doctors, nurses & medical volunteers who reached JNU to give first aid to injured students & teachers, was attacked by hundreds of goons. Mob manhandled doctors, nurses & threatened them. Our ambulance’s glass & windows broken, this is totally inhuman & insane. pic.twitter.com/IOiu7BHVbG

The JNU Teachers’ Association announced a peace meeting involving both the ABVP and protesters and as the meeting was underway at the university in the evening, a group of masked goons barged in and began the most violent in the campus till date, grievously injuring both teachers and students. The NDTV reported that over 50 assailants walked into the campus around 6.30 p.m.

Later in the day, videos of the goons walking into the campus with weapons while uniformed Delhi Police staff looked on, and the actual acts of violence committed by them were released widely on social media, causing an immediate uproar. The outrage doubled when most of the assailants were identified as ABVP activists through the images and videos that surfaced.

.@veenanmnair14 and I were at JNU between 9 pm and 3 am. We witnessed crazy sights and heard horrific stories: an assaulted blind student, targeted Kashmiris, mobbed journalists, terrified female students.

A detailed @newslaundry report on #JNUViolence:https://t.co/fpxjHH3SrL

According to the students who were present in the institution, there was a complete breakdown of security on January 5. Masked attackers were allowed to freely walk all across campus and systematically go from one hostel to another, intentionally searching for students involved in the protest against the fee hike. Videos have emerged from specific hostels with broken windows, showing large stones thrown around, and cars vandalized by masked goons. The students in the higher floors jumped off the balconies, suffering injuries in the process even as the assailants ransacked their rooms. They entered women’s hostels even as campus security stood by silently. A woman student of the university has come forward saying a policeman, whom she had approached, turned away from her when she told him of being slapped around by the mob inside the women hostel.

JNUSU (Jawaharlal Nehru University Student Union) President, Aishe Ghosh, was sought out and attacked to a point where he is reportedly in intensive care. Two other student leaders are reportedly under intensive care. 30 students and 13 faculty members also got admitted to the trauma centre of the All India Institute of Medical Sciences (AIIMS) on the same night.

The JNU administration has been accused of being intentionally slow to respond even as students reported continued violence. The videos that have emerged show very little visible police presence while the attack was underway. The Registrar of JNU issued a statement only at 9 PM, two hours after the attack had begun.

This aggressive crowd almost caused a stampede, they kept pushing and shoving us. We were backed up against the road divider which is really high. The man in the white sweatshirt kept trying to hit our hands and arms. He had his face covered with a muffler. https://t.co/ZbfAxiEPwr

Except for one NDTV reporter, the media was not provided access into the university. The other media persons at the spot were assaulted, heckled and not allowed to shoot videos anywhere in the vicinity. Yogendra Yadav, President of the Swaraj party, was stopped from entering the campus and was attacked for speaking to the media. Street lights were turned off outside the North Gate.

And now the police trying to stop the students of Delhi School of Social Work, who are peacefully protesting against the brutal #JNUattack!

Shocking how the same police which gave cover to armed goons at JNU campus becomes so active & forceful in stopping even peaceful protests! pic.twitter.com/uHNyzV9b19

The JNUSU has demanded the resignation of Vice-Chancellor Mamidala Jagadesh Kumar, accusing him of orchestrating the attack on students. "This vice-chancellor is a cowardly vice-chancellor who introduces illegal policies through the backdoor, runs away from questions of students and teachers and then manufactures a situation to demonise JNU," said a release from the student body.