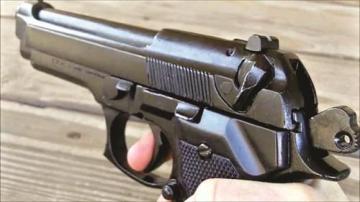 The teen who had shot his 19-year-old friend near Tambaram in the first week of November was reportedly trying to get him to join a rowdy gang. The youth, who confessed as much, also lead the police to a quarry pond in Nallampakkam near Vandalur, where he had discarded the country-made gun while he was on the run.

On November 5, Mukesh (19), a polytechnic student, had gone to visit his friend Vijay, a food delivery agent, at his home in Vengagamangalam village. The youth reportedly used the internet connection there to play PUBG and watch videos. In a short while, Vijay's brother who was sitting on the verandah heard a gunshot. Even as he and his wife rushed to Vijay's room, the youth ran out. They found Mukesh in a pool of blood and rushed him to the government hospital in Chromepet, from where he was referred to the Rajiv Gandhi Government General Hospital. He died on the way.

On Wednesday, Vijay surrendered and claimed that he had picked up the gun from the garbage. During inquiries, he confessed that he had gotten the gun from a rowdy named Selvam, whom he served as a henchman. He was assigned as 'security' to an AIADMK man of Vengadamangalam and reportedly need the weapon. According to locals, Vijay was used to showing off with the gun and often twirled it around for no reason. Selvam, of Perumathunallur in Kancheepuram, surrendered before the Theni district court on Monday, saying he had given Vijay the country-made gun.

According to Vijay, he was trying to talk Mukesh into discontinuing his studies to begin working as a henchman. Mukesh had downright refused him, though Selvam promised them a lot of money. He was twirling the gun around, still trying to convince Mukesh, when it went off, confessed Vijay.