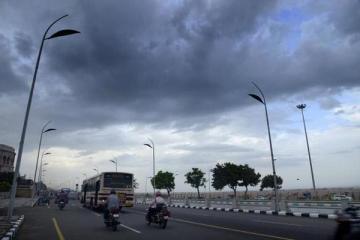 The initial calculations of the state regarding the damages caused in the first spell of rains this December, and the preparations for the upcoming rainy season, were released in a press release on Tuesday.

According to the weather experts, the rains would let up after Wednesday and the state would have a cloudy, drizzle-filled week. Very heavy rains are expected in South Tamil Nadu, Puducherry and Karaikal, Andhra Pradesh and Kerala. Chennai's temperature is likely to remain between 26 and 30 degree-Celsius while Madurai and Thoothukudi may get moderate to heavy rainfall.

Until Monday, at least 25 people have died in rain-related mishaps, according to the State data. Out of this, 17 people had died when a wall collapsed over families in Mettupalayam, Coimbatore. Over 1000 people are already in relief camps in Tuticorin, Cuddalore and Tirunelveli districts. Around 1,700 thatched and tiled houses have suffered damage. The ghats saw landslides at over 12 locations and the flooding of River Bhavani is still a threat to the settlements there. Flash floods have destroyed crop in Perambalur, Thanjavur areas. Puducherry has also incurred similar losses.

Chief Minister Edappadi K Palaniswami also had a review meeting, during which the Commissioner for Revenue Administration, J Radhakrishnan, made a presentation. Around 639 zonal teams were identifying the vulnerable areas 1,800 personnel were pressed into other monsoon related works, across the state. Apart from this, around 1000 SDRF personnel and over 4,100 trained volunteers have been deployed in the districts.

In the metropolitan city, there are about 6,600 staff and volunteers on the standby, in case of a flood. Over 4,500 schools, 100 colleges, and over 2,400 community halls have been prepared to lodge people. There are also 2,100 generators and 480 pumps ready at various spots.

Meanwhile, a low pressure area and its associated cyclonic circulation located northwest of Lakshadweep is expected to bring more rains in the coming week.