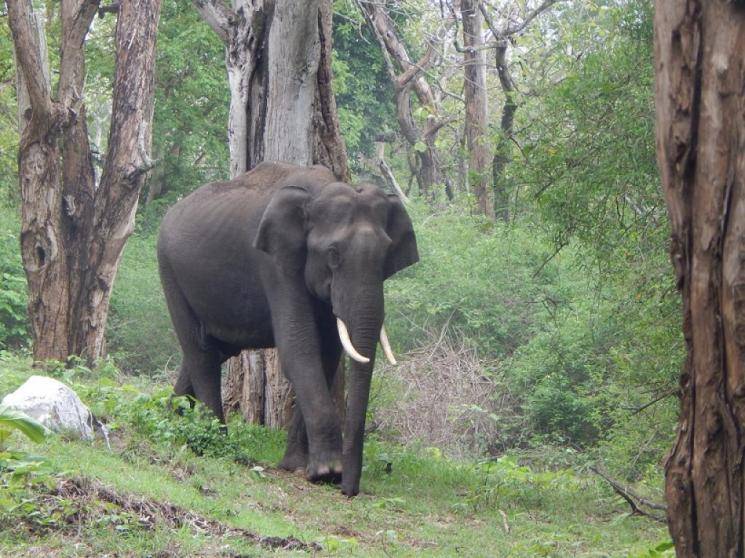 Vellore: In a rather shocking incident, a farmer tried to cover up the carcass of an elephant which was electrocuted by the electric fencing around his farm in the district, on Sunday. In another incident, a young man also was electrocuted after he touched the illegal electric fencing around a farm in the same locality in the district.

According to sources, the Tamil Nadu government has banned the usage of electrical fencing around farms as they have caused loss of several human and animal life. The issue is particularly deeper in areas that come close to the reserve forests in the state.

Foresters say that they have noticed a sudden increase in the number of elephants migrating from the neighbouring state of Andhra Pradesh in this season. Though they have tried chasing them back to Andhra forests, the jumbos reportedly keep returning. A herd of nearly 45 elephants has been in the area for a few days, say sources. The foresters had been tracking the movement of the jumbos and reportedly noticed that a young male was missing.

The foresters began looking for the male elephant and were told that there could have been an accident in one of the farms adjacent to the Paradarami  Reserve Forest. Further inquiries revealed that the elephant had come into contact with the live wire fencing around the farm of one Pitchandi. The incident happened on the dawn of Sunday and it was thought that the young elephant was foraging when it touched the fencing around the paddy fields. Instead of informing the authorities, the farmer tried to cover up the incident by hiring an earthmover to bury the elephant.

A search has been launched to nab Pitchandi and the owner of the earthmover. Both men are reportedly absconding. Veterinarians have exhumed the body of the elephant and are conducting a postmortem.

Illegal electric fencing also claimed the life of a youth in the district this week. According to sources, 20-year-old Santhosh Kumar died in Poomalai village after he came into contact with live wire fencing around a groundnut-and-sugarcane farm on Tuesday. The Pallikonda police, which registered a case, took the body to the Government Vellore Medical College Hospital in Adukkambarai and arrested the owner of the farm as he had put up live wire fencing.