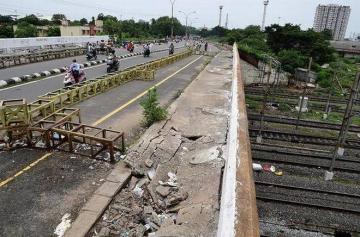 The centuries-old and currently-crumbling Elephant Gate Bridge in Chennai is all set for the much-needed renovation it needs. Tenements around the bridge were razed down initially and the work began on the weekend after arrangements were made to reroute trains via the railway tracks near Tangedco as the railway lines beneath the bridge cannot be used.

According to sources, the commuters on the route were surprised on Friday to find the bridge barricaded even for motorists. The decision to renovate the bridge was taken a couple of years ago, however, the work had been suspended due to various technical difficulties. The bridge, which connects Sowcarpet and Choolai is in a dilapidated condition and debris regularly falls from the bridge to the tracks underneath.

The 580 metres-long bridge is being rebuilt by the joint efforts of the Southern Railway and Tangedco. Officials stated that the work would be undertaken at a cost of 26.45 crore. The bridge is also being expanded slightly to accommodate more railway tracks under it.

In the 18th century, the British government built a wall around the areas leading to the harbour to keep the raids of Hydar Ali at bay. The wall had several gates, one of which is the surviving Elephant Gate.