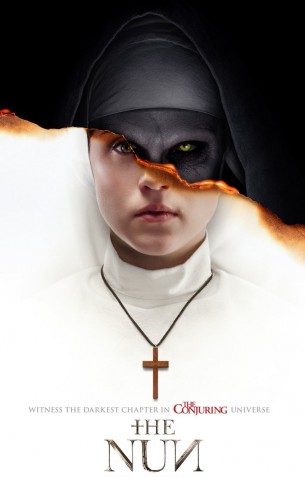 The Nun is an American horror film directed by Corin Hardy. The screenplay is written by Gary Dauberman is from a story by James Wan and Gary Dauberman. The Nun film stars Demian Bichir, Taissa Farmiga, and Jonas Bloquet.

A church Father and a specialized Sister go to Romania to investigate a strange suicide. They experience a supernatural presence in the follow-up, what happens in the progression forms the remaining story of the movie The Nun.

The three lead actors such as Demian Bichir, Taissa Farmiga, and Jonas Bloquet have understood their roles well and performed accordingly in The Nun. Their scary reactions perfectly replicated their present life-threatening situation, but unfortunately, the haunt did not transform to the audience as the presentation was weak. Bonnie Aarons as The Nun/ Valak grabs the hotspot. But, there are many characters who consume screen space with less purpose and importance, hence they missed out to stay in our mind.

James Wan and Gary Dauberman have set the premise decently by forming a usual yet convincing backstory. But Gary Dauberman could have worked a lot more for the screenplay as the execution is flat with predictable stuff. Few moments and ideas are exciting to watch, but director Corin Hardy could have put more efforts towards narration as well. Overall, the experience, unfortunately, gives a mixed feeling as the impact is low, however, the dialogues are satisfying in The Nun.

Sound department has succeeded big time, the mixing highlights the value of the genre. Abel Korzeniowski’s background score is haunting, but he could have tried something unique to refresh the audience. Maxime Alexandre’s camera work is smart as he has perfectly given what a horror flick requires, wish the content had provided him more scope to prove his talent. Editors have made a smart idea to lock the final cut with just 95 minutes runtime, they have made sure the uninteresting flow does not test the patience of the viewers.

Keeping certain appreciable ideas aside, there are also some flat elements which appear at random basis that reach us with clumsiness. Unlike our expectations, the number of scary sequences was very little, and so there is a lack of excitement throughout the movie. Surprisingly, even the makers seem to be not with the intention of haunting the audience. There were few sensible and properly connected dots with ‘The Conjuring’ movie which satisfied the disappointment of ‘The Nun’ to an extent. Valak’s introduction scene was decent and pre-climax was convincing too.

Verdict :A not so impressive horror flick that is just rarely exciting

The Nun is a English movie. Jonas Bloquet,Taissa Farmiga,Demian Bichir are part of the cast of The Nun. The movie is directed by Corin Hardy Music is by Abel Korzeniowski . Production New Line Cinema/ Warner Brothers Pictures.