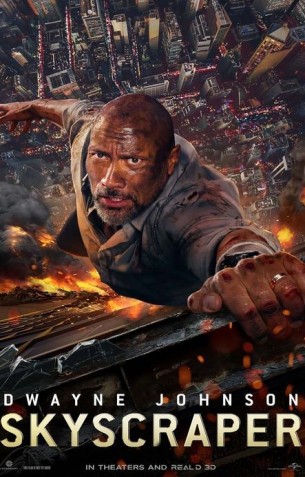 Owner of ‘The Pearl’, the tallest building on earth calls out Dwayne Johnson to check out the security systems out there after the completion of construction. A destruction occur, how Dwayne saves his family members who are struck at the building forms the remaining story.

Director Rawson Marshall has delivered a product that focuses strictly on entertainment. In that way, he has succeeded to an extent as the movie engages well with the tried and tested commercial format. The filmmaker happens to be the writer as well, but in that case, he has missed out to satisfy the senses by making the logic right.

Screenplay has its own hits and misses, the engagement factor is ought to be mentioned, but there are plenty of mistakes while bringing out certain crucial moments on screen. There are some life or death situations showcased in a very simple manner rather than implementing the seriousness. Editing is found to be abrupt on all those important segments.

Dialogues are okayish, they convey the matter correctly, but doesn’t excite much. The flow is predictable in most of the parts, hence the curiosity factor is put on hold. Family emotions work to a limit, but on the flip side, few small twists with respect to the conflict doesn’t provide the rightful impact as the characters are not given enough space to get established.

Dwayne Johnson is fully beefed up, but the major accident happened to him doesn’t correlate with his body. However his fans are sure to be joyous of both his performance and presence. Chin Han is subtle and impressive, playing no tricks on his character is an appreciable move. Other artists unfortunately appear with lack of emphasis.

Steve Jablonsky’s background score fails to get an opportunity to get noticed, either the scope is at the bottom level or the music itself. Robert Elswit’s camera work is stunning, visuals are at the topical level mainly on the mesmerizing building’s outdoor shots. There are handful number of old-school ideas induced along the progression.

Art direction blent with VFX department have seriously made something unimaginable with the creative ideas regarding the adventurous building. Though few stunt portions are not given the time space to evolve, there are many that packs solid punch, ones risking the hero’s life to pinpoint. The mirror sequence at the end was enjoyable, the gimmicks were especially sensible.

Tension that we hold ‘The Rock’

Verdict :A passable thrilling saga made in the regular commercial format

Skyscraper is a English movie. Dwayne Johnson are part of the cast of Skyscraper. The movie is directed by Rawson Marshall Thurber Music is by Steve Jablonsky . Production Legendary Pictures,Universal Pictures.