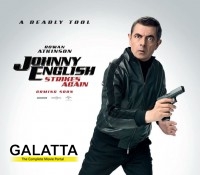 Johnny English Strikes Again is a spy action comedy film directed by David Kerr. This film is produced by Rowan Atkinson, who reprises his role as the title character.

Rowan Atkinson as Johnny English is a spy who takes up a dangerous cyber attack case. How he successfully complete this mission and save the world forms the remaining story.

The core plot is very usual but still, the script was overall satisfying as the conflicts followed the current trend. The flow has its own ups and downs, the movie opens up with a well-packed introduction scene to re-establish the hero character, but misses to hold the momentum after that. The situations have been written well in the paper but somewhere things fall during the show without being effective. The comedy sequences do work out at places, but then there many silly portions that fail to attract. There are some hilarious moments, but then these moments are not converted into good scenes to keep the enjoyment alive.

Director David Kerr has put in all his efforts to extract performance from the protagonist and has missed delivering impactful scenes. Rowan Atkinson has tried his level best to elevate the product with his funny expressions, but over a point, it becomes boring the quality tends to be a barely watchable one. On the other hand, Olga Kurylenko as Ophelia who has played as a co-spy was not given a strong character and she does not add value to the story. Being a rare spy-comedy genre, it is quite unfair to look deep towards logic, but this movie missed out to maintain even some basic logic right at certain places.

Background score is decent, but the music director could have tried some weird compositions keeping the quirky situations in mind. The cameraman has provided what this regular commercial potboiler requires. The editor has done a pretty good job with the cross-cuts and the 90 minutes runtime is a big advantage as in spite of the lags, the progression did not test the patience. The filmmaker has smartly incorporated some exciting theatre moments so that the movie would satisfy the fans of the actor in the male lead role. On the whole, only the opening scene and the lengthy climax were truthful to the genre. Rest of the areas were either amateurish or lacks with a shortage of comedy elements.

Verdict :A partially entertaining run-of-the-mill commercial product that appears to be silly at many places.