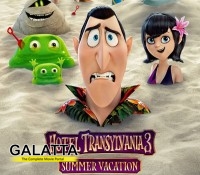 The monster family go for cruise vacation where faces a major problem from their old enemy. How they escape from the threats caused by the baddie forms the remaining story.

Script is as thin as hair, so the progression had no refreshing elements to offer. Screenplay is targeted for the kids, the humour is visually expressed to attract the children. But dialogue wise, the content is weak. The direction was decent, engagement was little on and off throughout the movie.

Characters are penned convincingly, hence the reflection on screen accelerates the watch. Certain humour ideas click properly, but definitely there could have been much more of them. The spot where the backstory gets revealed is silly and poorly presented. Animation is neatly done, mainly during the quirky areas.

Background music goes well along the flow. Editing is crisp, 95mins duration happens to be a big plus. Team has taken the target audience (kids) for granted as nowhere the logic is on par with reality. The impact is flat as the conflict between the hero and villain is shown in a monotonous manner.

The film is visually rich and 3D effect is satisfying too, credits to the VFX team for their work. Coming to the entertainment factor, the movie keep switching gears at regular intervals. However the style of comedy delivered here is sure to impress the animation movie lovers and kids.

Verdict :A mediocre animation comedy that is visually pleasing