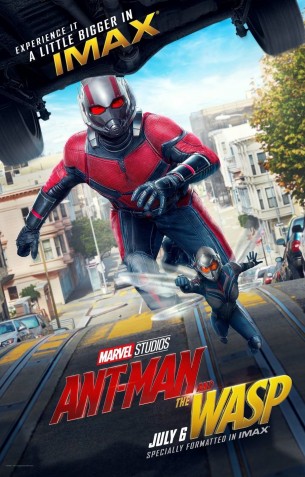 Ant-Man and the Wasp is a 2018 American superhero film based on the Marvel Comics characters Scott Lang / Ant-Man and Hope van Dyne / Wasp. Produced by Marvel Studios and distributed by Walt Disney Studios Motion Pictures, it is the sequel to 2015's Ant-Man, and the twentieth film in the Marvel Cinematic Universe (MCU). The film is directed by Peyton Reed.

Ant-Man is in house arrest for two years as ordered by FBI. But he secretly, goes out to save the world. Wasp come to know that there is a possibility to bring back her dead mother by using quantum realm. What happens in the progression forms the remaining story.

Paul Rudd is fit, handsome and has managed to pull-off the Ant-Man role with ease. His comedy timing clicks at many places. Evangeline Lilly gets to the thick of her character nicely right from the beginning. She grabs the limelight than the hero in few scenes.

Michael Pena offers plenty of fun to the flow, his serious are superb hilarious. Michael Douglas play a vital role and his ideas take the story forward, his technological thoughts create an interest to follow the narration.

Director Peyton Reed has adapted the comic and the characters correctly and has delivered them on screen with full potential. Writers have done a good job with the screenplay, the engagement is quite steady from start to finish. Dialogues are on point and taps the humour quotient in regular basis.

Script follows the usual template of a superhero action movie. Villain’s backstory is so thin and hence the character misses out to self-establish itself even till the end. The proceedings are predictable, therefore the thrill element is kept flat. In spite of the genre’s cinematic liberty, there are some logic loopholes that break the continuation.

Honestly, the Ant-Man character underplays a lot which is kind of disappointing considering the superhero material. Heroine overshadows in few crucial life saving situations. Characterization of Walton Goggins is poor written and presented in the movie, his presence demands no necessity.

Movie is engaging even in the talkie portions as the substance is strong. Also the racy pace helps to hide the simplistic plot. Quantum realm concept could have explained properly, as it turns out to give a feel of sitting in a physics class all of a sudden.

Background music is perfect to the situations, the peppy tunes that aptly fits for the high voltage sequences are energetic. Camera work standard iis superior, be it the angles or capturing the details, the team has done a splendid work. 3D experience was overall decent.

Editing is crisp, the dips are less in number, team’s sharp cuts are also a reason for the film’s hook factor. Visual effects are stunning as usual, clarity is fantabulous. Marvel brand is written all the stunt scenes, action choreography packs solid punch and pulls the attention.

Few emotions are unfortunately conveyed oppositely in particular situations as the comedy element is induced at random proportion. So the seriousness doesn’t really pop-out. The long climax is filled with exhilarating action treat for the franchise fans.

Continuity to Avengers: Infinity War is shown in the mid-credit scene which will make the crowd to go crazy. And the post-credit scene is flat. But the closure title elevates the current position of the Marvel series.

Interesting elements present throughout the flow

Emotions are not properly conveyed

Ant Man And The Wasp