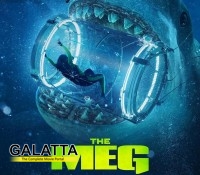 Megalodon, a giant shark surround the ocean. How Jason Statham and team kill it to save the area forms the remaining story.

There’s nothing much to score with respect to performance, yet Jason Statham impresses with his fitness and presence. Ruby Rose and Winston Chao shine among the huge supporting characters list. But there are plenty of side artists exist without any purpose.

The script follows the usual ‘Shark’ movie template, but this one fails to engage with surprises in the progression. The flow is flat with very less good moments, but overall the film is dry and quite boring. Dialogues are either heroic or dramatic but never strike the right chord. The direction is only at a mediocre level, does not raise up the intensity by some sort of smart incorporations.

The background music of Harry Gregson-Williams is decent for the output that has come presented. Tom Stern’s cinematography is good and he worked hard to make the underwater shots appealing, and he has succeeded in the process. Editor Steven Kemper has to be appreciated for wrapping up the final cut for 110mins, the lags and the sluggish pace is because of the lazy screenwriting.

The concept is familiar, but enough to satisfy the genre’s fans, but with lack of intense moments, the film just partially hold. The finale is, in fact, crazy, the 15mins long climax buckles tight. Stunts and visual effects are pretty satisfying, the 3D experience was also fine in many parts.

Verdict: A regular template Shark movie that excites only in bits and pieces.