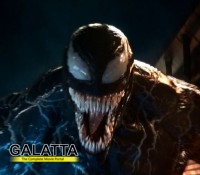 Venom movie is an American superhero film based on the Marvel Comics character. The movie is directed by Ruben Fleischer and produced by Columbia Pictures and it stars Tom Hardy in the lead role.

The specimens of the top-secret experimental species meet with an accident and are exposed to the outside world. One among which is Venom, it enters into Tom Hardy’s body. What happens after that forms the crux of the story.

Venom character was introduced as a supervillain in Spider-Man 3 which came out more than a decade ago. The thought, to experience the origin story of the terrifying villain character was expected. But the movie was packed in the right opposite way. The black colored sticky creature was scary until it entered into Tom Hardy’s body, there was no justification for how the whole saga turned as a joke after that.

The film starts at an extremely slow pace with the first 40 minutes had nothing to do with the script, even the characters were not established. Director Ruben Fleischer has done a neat job, he has presented exactly what was written on the papers. The script is literally hair-thin and it follows the usual template of a superhero commercial potboiler. The screenplay dips most places as the entertainment is carried in the half-baked stage.

It is not that the flow is boring, it is fairly engaging, but it was completely monotonous to see the villain character trying to crack jokes throughout the movie. Dialogues are quite funny and it made the interaction between Venom and the protagonist decent. The road-chase sequence in the first hour revealed the superpowers of the Venom character well.

Tom Hardy is undoubtedly the savior of this movie, he carried the character given to him with ease. The other supporting artists have no big importance, the villain is present without a purpose. Background music is familiar and the sync is missing during the fight scenes. Camera work has nothing exceptional in it, but the overall work was tidy, the fact that most shots took place at night just to emphasize the mood of the film is unacceptable. Editing is crisp and the run time of 105 minutes did not end the product as a tiring one.

The comedies might appeal to certain Marvel universe fans, but the poorly executed short climax sequence would disappoint them as well. The end was decent with a tiny twist which was followed by a mid-credit scene that leads way for the sequel. The 3D experience is also convincing as the visuals had fine depth.

Verdict :A big joke in the name of a dark supervillain subject, just a rarely entertaining venture.

Venom is a English movie. are part of the cast of Venom. The movie is directed by Ruben Fleischer Music is by Ludwig Goransson . Production Marvel Entertainment,Sony Pictures.