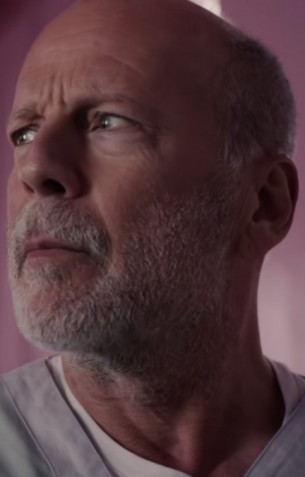 Vigilante Joseph Dunn (Bruce Willis) & 24 split personality disorder patient Kevin Wendell Crumb (James McAvoy) are incarcerated in a psychiatric institution by Dr. Ellie Staple (Sarah Paulson). Here, Dr. Staple is trying to cure these 2 and Elijah Price (Samuel L. Jackson) of their supposed mental disorders. However, 2 of the 3 patients form an alliance and escape. The lives of a lot of people are at stake... What happens next? Watch Glass for the answers!

In this film, the master of mysteries - M. Night Shyamalan has actually brought together the lead characters from 2 of his earlier films - Joseph Dunn & Elijah Price from Unbreakable (2000) and Kevin Wendell Crumb from Split (2016). The very premise of such a combination sets forth a mood of exalted excitement in the viewers.

Glass seems to be a sequel to both Unbreakable & Split or rather the 3rd part of the "Eastrail 177 Trilogy". James McAvoy is absolutely brilliant in his portrayal, bringing to the fore his shift between the different personalities inside of him, within a matter of seconds. He is riveting in some sequences and it feels like he gets inside the viewers' head at times. Bruce Willis is his usual self, breezing through the action sequences. Samuel L. Jackson gives a very poignant portrayal and as the man holding a number of secrets, is perfect.

Sarah Paulson and Anya Taylor-Joy seem to have gotten the raw side of the deal and have very little to do. The buildup to the clash between the Superhero (The Overseer) and the Supervillain (The Beast), cunningly orchestrated by The Mastermind gains a lot of traction but the meandering randomness leaves the viewers hanging.

As ever, the director is spot on with his scene compositions and with his cinematographer Mike Gioulakis, gives the viewers a visual treat. Unfortunately, the same cannot be said of the screenplay.

Verdict :Glass is neither here nor there, balancing wow & ordinary but is definitely worth a watch for fans of Unbreakable, Split and director M. Night Shyamalan!

Glass is a English movie. Samuel L. Jackson,James McAvoy,Bruce Willis are part of the cast of Glass. The movie is directed by M. Night Shyamalan Music is by West Dylan Thordson . Production Walt Disney Pictures,Universal Pictures.