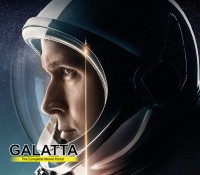 How Neil Armstrong gets selected for the ‘Mission Gemini’ after going through a NASA interview and his journey to the moon forms the crux of the story.

The research is very deep, not only on Neil Armstrong’s life, many unknown facts regarding space and how things work there is conveyed. But certain pieces of information are advanced and could relate only to the science experts, so it was quite hard to hold on to some key points. The layers of the NASA working style and Government interference have been explained in a bold manner. Tension builds up heavily whenever the interior of the space shuttle is shown during the travel, as the sequences are realistic to the core.

The family sequences that appear frequently dips only with minimal engagement, though there is an emotional connection in those portions. The pace drops down in the middle portions that reduce the involvement during the watch. The brand ‘Neil Armstrong’ rides the show well, he life sacrifice he has made is shown in a natural manner that brings out a respect for him. The final 20 minutes is mind-blowing, the moon episode has been presented with so much passion.

Director Damien Chazelle has delivered one of the most realistic Space films ever. He has gathered so many details regarding Neil Armstrong unknown personal life. The writing has a convincing depth, but a few non-official portions could have been cut-shortened to increase the engagement value. The screenplay justifies the context neatly and with some good directorial skills, the product outcome is worthy. The dialogues are sensible and they have been extracted with nice variations during the dubbing process.

Neil Armstrong played by Ryan Gosling has made complete justice to his role by leaving a subtle performance. He has smartly captivated the character he has been given without over-doing any sort of expressions. But screen space is less for the rest of the supporting artists. And, the fact that the movie concentrates keenly on ‘Neil Armstrong’ character is a bit disappointing. The experience turns overwhelming through some outstanding sounds, all the necessary goods have been incorporated to give an authentic feel.

The camera work is exceptional, cameraman Linus Sandgren has fine-tuned the visual quality and color tone to adapt to the story’s 1960s time-period. The background score of music director Justin Hurwitz is great, they come along with the situations without popping out randomly. Editing of Tom Cross is impressive, he has smartly shifted the scenes through vintage-style cuts. The richness in VFX elevated the quality of the content.

First Man is a English movie. are part of the cast of First Man. The movie is directed by Damien Chazelle Music is by Justin Hurtwitz . Production Universal Pictures.