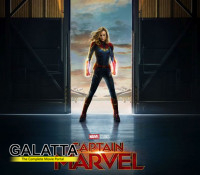 Captain Marvel is the origin story of what has been billed as the strongest Marvel Cinematic Universe character. The film stars Brie Larson in the titular role.

Brie Larson as Captain Marvel has stepped into the shoes of the character with ease and has elevated herself around the situations in the film with her effortless performance and seamless dialogue delivery. Samuel.L Jackson has supported the film with his lively presence, who also carries forward the tempo with plenty of enjoyable jokes. Ben Mendelsohn, who stars as the prime antagonist Talos could have been written in a much better and stronger manner, which would have no doubt built the intensity of the film.

The storyline of Captain Marvel is solid and the progress adds good value to the script as certain situations have been conceived smartly by directors Anna Boden and Ryan Fleck, who have done a decent job on the whole but could have incorporated few more creative inputs to improve the mass factor in the film.

The screenplay is neat and the film manages to engross the viewers till the end, but there are moments which provided sluggish feel especially in the beginning. Though the story is convincing, the film takes its own sweet time to reveal the knots. Dialogue writing is topical, both the comedy and serious sequences have been conveyed in a fine way.

Technicalities are merely perfect. The camera work is amusing and the makers have given full scope to enlarge the vision. The grandeur of action sequences are less in comparison to the previous Marvel flicks, but the film has enough clap-worthy moments to please the audience. Editing is crisp and the 2 hours runtime is a valuable factor to hold the crowd's attention.

The opening Marvel title card is a perfect tribute to the Late creator Stan Lee, who also appears in a short cameo in the movie for which the fans go crazy.

There is an exciting play in the flow with the fiction characters named ‘Skrulls’. The narration is smart while establishing the central character’s backstory. There are a few memorable scenes that deserve a special mention, the train fight, and record room sequences are highly impressive. The long-awaited answer to what actually happened to ‘Nick Fury’s eyes’ has been explained well. The twists are good, but they don’t appeal in an impactful way visually on screen.

A couple of powerful sequences towards the end beautifully define the ‘Captain Marvel’ character. It also establishes the strength the female lead has as a woman and her super-powers are also strongly established.

The mid-credit scene is excellent with meaningful content as it raises the curiosity for ‘Avengers: End Game’ to sky-reaching heights. The end credit is fun and brings a mild smile on the faces of the fans.

To conclude, the ultimate aim of ‘Marvel Cinematic Universe’ is to offer entertainment to the audience. In that case, Captain Marvel is a winner.

Verdict :A neatly made entertainer that holds well, ‘Captain Marvel’ as a character has been defined in a powerful manner

Captain Marvel is a English movie. are part of the cast of Captain Marvel. The movie is directed by Ryan Fleck,Anna Boden Music is by Pinar Toprak . Production Marvel Entertainment.